All aboard the mightly Shahdag!
Crossing the Caspian sea

After passing through a fairly rushed yet straighforward passport control at Alat Port we cycled ominously in silence towards the Shadag, the cargo vessel that was to transport us across the Capsian to Aktau, Kazahkstan. A large vessel with a sizable underbelly, it specialised in carrying train carriages that housed a range of commodities from steal, coal and oil. Pushing our bikes onto the ship the feeling anticipation turned to excitement and anxiety as we squeezed alongside the giant creaking cargo, propped up with small rusting stilts that seemed far too precarious for what is a notoriously choppy crossing. With the bikes rested agains a few oil drums we made our way up to top deck and immediately found ourselves in a scrum to secure a decent cabin; a task Jess achieved with ruthlessness! The cabin, much like the entire ship, was in good nick and the two of us and Dave easily settled in and enjoyed our two bunkbeds for the reaminder of the crossing. Assuming an imminent departure as indicated, we rested peacefully, happy with our new home for the next 19 hours or so….

​...or so. Over 100 hours later we were still contemplating life in Central Asia from the Caspian as a combination of factors caused an extended rest period at sea. The signs were there early. After a peaceful and incredibly calm sleep we awoke singing the praises of the masterful captain who was overseeing such a smooth jouney only to discover, in fact, we were still in bloody Baku.We quickly realised by the reaction of the crew in answer to our polite question of time keeping that it was best to submit to the sea Gods and disgard any notion of an on-time arrival. Within a few hours it became obvious this was an experience we would never forget. Strangers quickly became friends, languages confusingly exchanged and endless games of charades with intruiging people continually played out in different quarters of the ship between different nationalities.

Soon into the journey (circa 20 hours) we made friends with a Georgian man named Thomas who took us under his wing. An old hand at Caspian crossings, Thomas applies his trade as an engineer living out of a train carriage. We were lucky enough to visit this on a couple of occasions during the crossing, and, as it has come to be expected with Georgian hospitality, were duly offered cha-cha, coffee and on one occasion barbequed fish caught that day from an opening in the ships hull. Getting to know Thomas, along with the chef, the captain, the first mate and countless ship workers was truly great fun and we were humbled by the interest and kindess they showed us. Despite this with so many personalities on board it couldnt help but feel as though we were locked inside an Agatha Cristie novel and as our imaginations grew with every hour on the ship I became certain that the chef had murdered a crew member and was deliberatly cleaning up quickly after dinner to hide his body. As it turned out he was just exceptionally diligent and a damn fine cook.

The first few days drifted by slowly (much like the ship that was now down to one operational engine) spent mostly chatting, reading, playing chess and taking photos of the beautiuful sun that seem to set so slowly as if pondering its decision to relinquish the day to night. The journey at this point was chronoligcally unimportant and we revelled in the feeling of being lost in space, free of internet and shut off from depressing news stories that seem difficut to escape from whenever you are in the world.

For the crew it was business as usual and the delay did nothing to dampen their spirits. Indeed they were so friendly and relaxed they gifted us freedom to roam the ship that included spending hours in the control tower investigating shipping routes, monitoring radar as well as mingling between cargo. The one exception was when we had to ask to climb the crow's nest. The yelled response from the deck, ‘two minutes’, followed by a rye smile. This however proved to be the high point in crew/passenger relations as things took a nasty turn for the worse.

The unforgettable event occured at 11:30 am on day three just before the crew were due to take their well earned lunch break. Everything was at is should have been before a commotion erupted from the hallway and within seconds nearly all on ship were crammed into the corridor at the intersection to the toilets. Temperatures were rising uncontrollably fast as the passengers and crew exchanged in a heated debated in ill-tempered Russian that included fast moving, flaring hand gestures. Something serious was occuring. Whatever it was had to be seen so I turned around and gestured to Jess to join me. Jess however wasn’t anywhere to be seen. When I turned the corner I saw her immediately, looking unbelievably sheepish holding non other than a roll of toilet paper. A roll that was now drawing a huge amount of attention by all concerned and was clearly the centre-piece of the debate. Fingers were being pointed left right and centre towards all the tourists including Dave and two Russian backpackers and it quickly became obvious that we were not the flavour of the ship, and for good reason: Jess had blocked the crews only toilet and they were having a difficulty in stemming the rising tide inside the cubicle. My diary entry at the time might give a feel for the atmosphere and feeling on board:

5th August, 12:30 pm. Choppy Waters, ‘atmosphere turning on Shagdar, losing allies by the hour. Toilet paper has blocked the communal toilet and before lunch an extremely heated conversation ensued after Jess emerged from the toilet with tissue paper in hand! Queue angry workers (now cleaning it up), angry local customers (can’t poo) and angry Russians (accused of pooing). It’s bloody Lord of the Flies in here! Our only hope is Thomas the Georgian train driver who has taken us under his wing. If we lose him we may walk the plank! Time to stay in room (which also has a blocked toilet they don’t know about) and lie low.’

‘Turning on each other. Dave changing his story by the minute over his toilet history as rising toilet level nears breaching point.’

By mid afternoon the debacle was far from over as the crew set to work on dismantaling the toilet floor to inspect the seemily extensive damage. Sincere apologies through broken Russian fell on deaf ears and the three of us withdrew into our cabin with the agreement to leave only for food, water and possibly emergency evacuation. Late in the afternoon the door knocked and up sprang the three of us in fearful anticiption. We approached nervously and opened to find a crew member laughing and ushering us out to deck. Was this some kind of trap? Where were they taking us? Do modern cargo vessels still have planks? The answer was far less daunting as we emereged to see half the crew with their tops off having a hose down from an large tap emitting water at feroscious speed! It was a hose party! And...we were invited! All was forgiven! The next hour we stripped down, hosed each other silly and laughed out all the toilet driven anxiety. It seems these sailors in the Caspain don’t hold grudges and we were all friends again. Although it must be said not to the extent that we ever dared to return to the communal toilet.

As our heads hit the pillow on the third night spirits were high as we had arrived in Khazak waters and were anchored a mile out from Aktau Port queued behind an enormous tanker with our estimated arrival set at 8 am the next moring. At 6.30 am we woke still out at sea and in middle of a thunderstorm. As the clouds descended on the ship, visibilty was barely good enough to see the ships railings from our window and flashes of lightening illumated the cabin creating an awful sense of dread. I swayed out to the corridor to get the latest info but couldn’t find anyone until I headed to the mess to see captain and crew laughing and joking while tucking into their egg on bread. What is it with these people? Nothing scares them! Ten minutes later we were underneath clear skies again but because of the storm our embarcation was delayed until the afternoon. The afternoon came and went and only once had we packed everything up and fallen to sleep did we get the knock from a Kazak army office proceeded by the words, ‘time to go’.

We departed at around midnight, a mere hundred hours aboard with a sense of relief yet also of sadness, similar to leaving a party early. It had been an unforgetable crossing that we were totally unprepared for. I like to feel that for a short period we were fortunate enough to experience the daily route of life at sea and appreciate so many different aspects to the shipping economy. In particular it was fascinating share stories and gain an insight into lives of so many interesing people on board and as ever on our trip, it is the people that we remember the most. 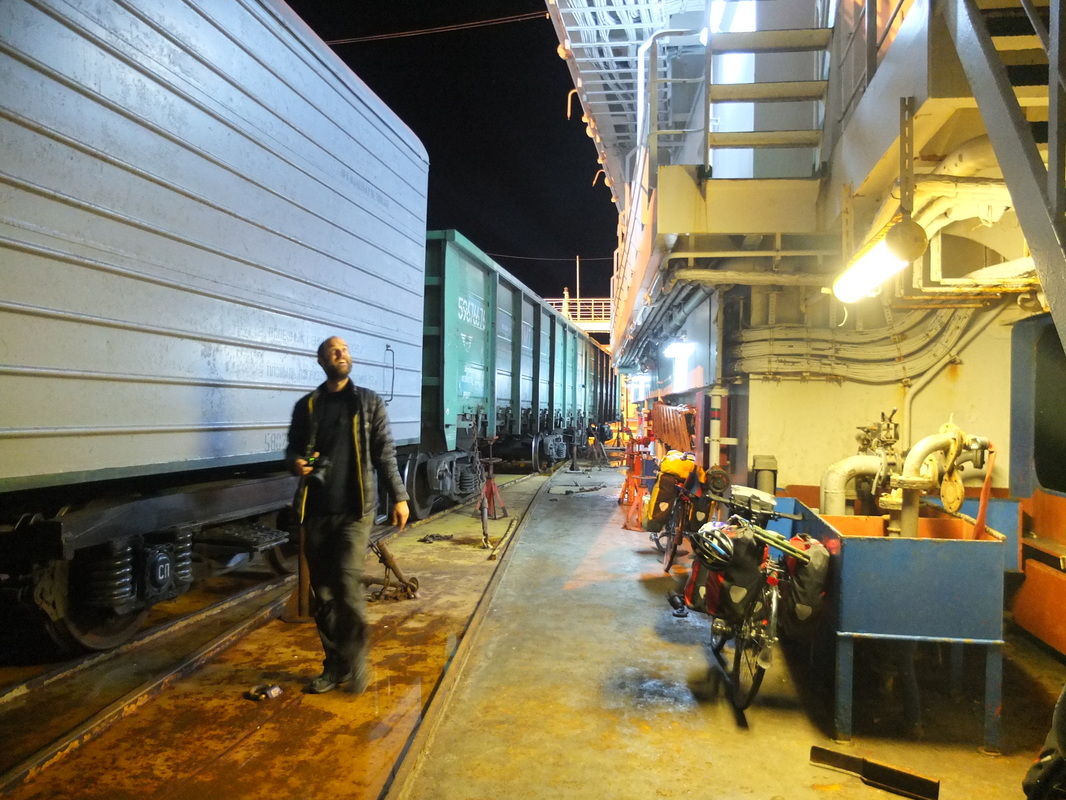 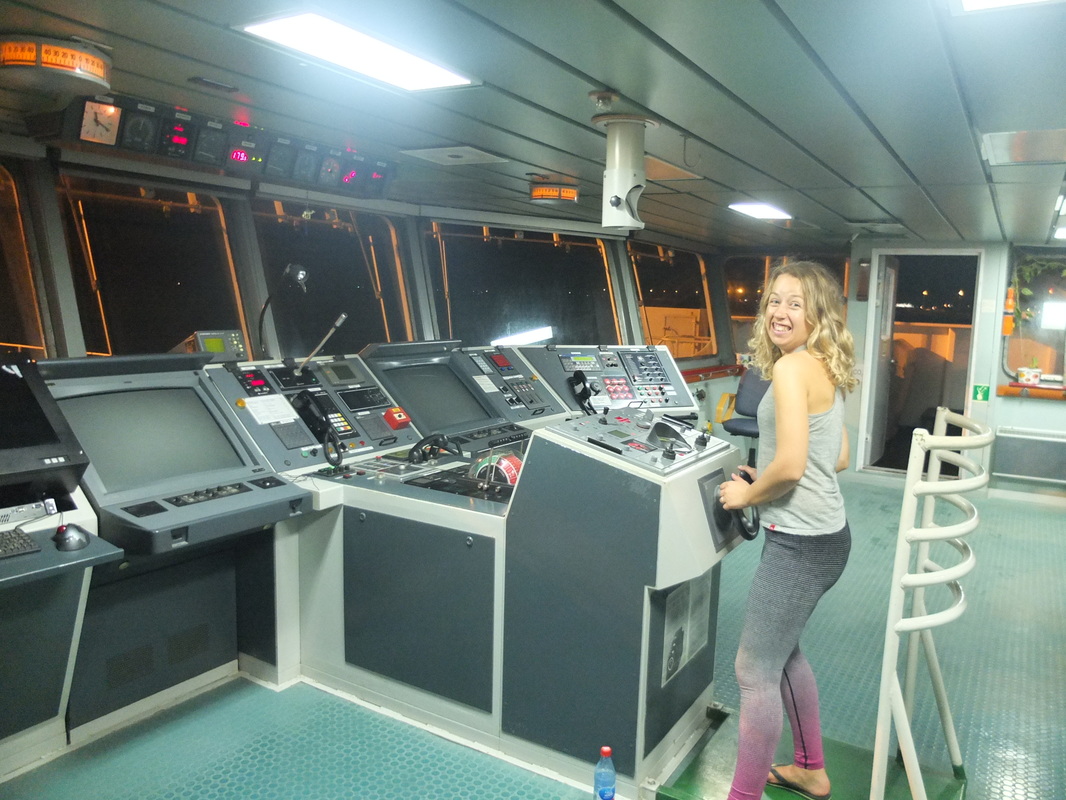 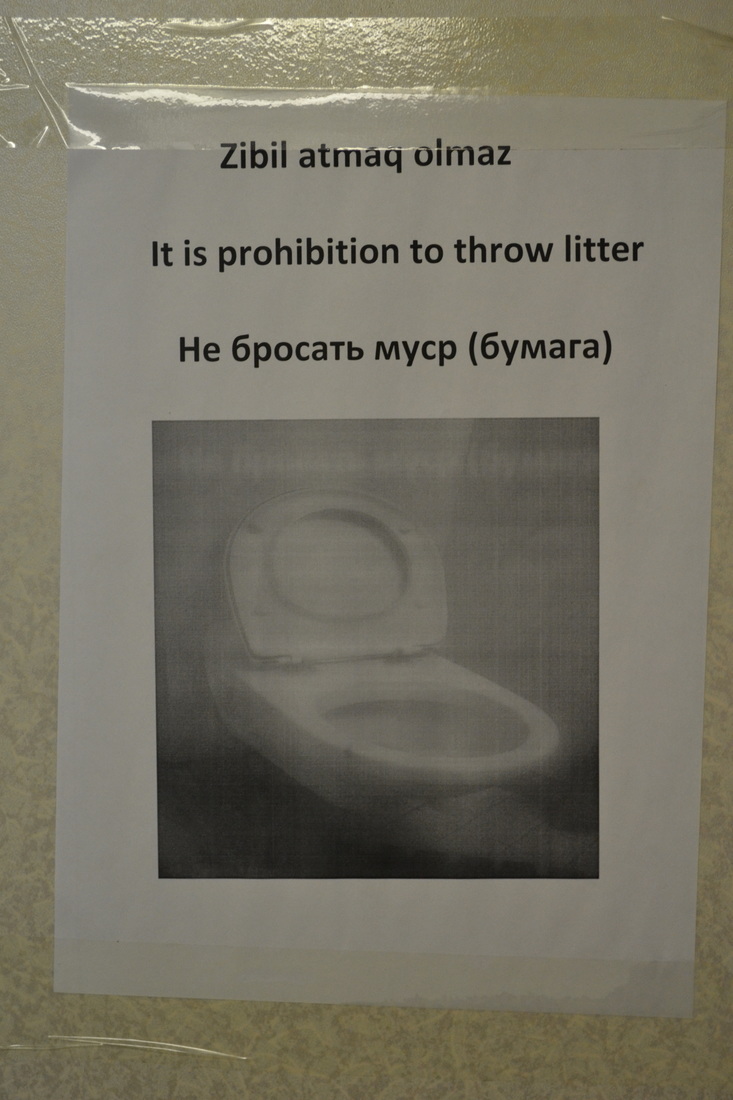 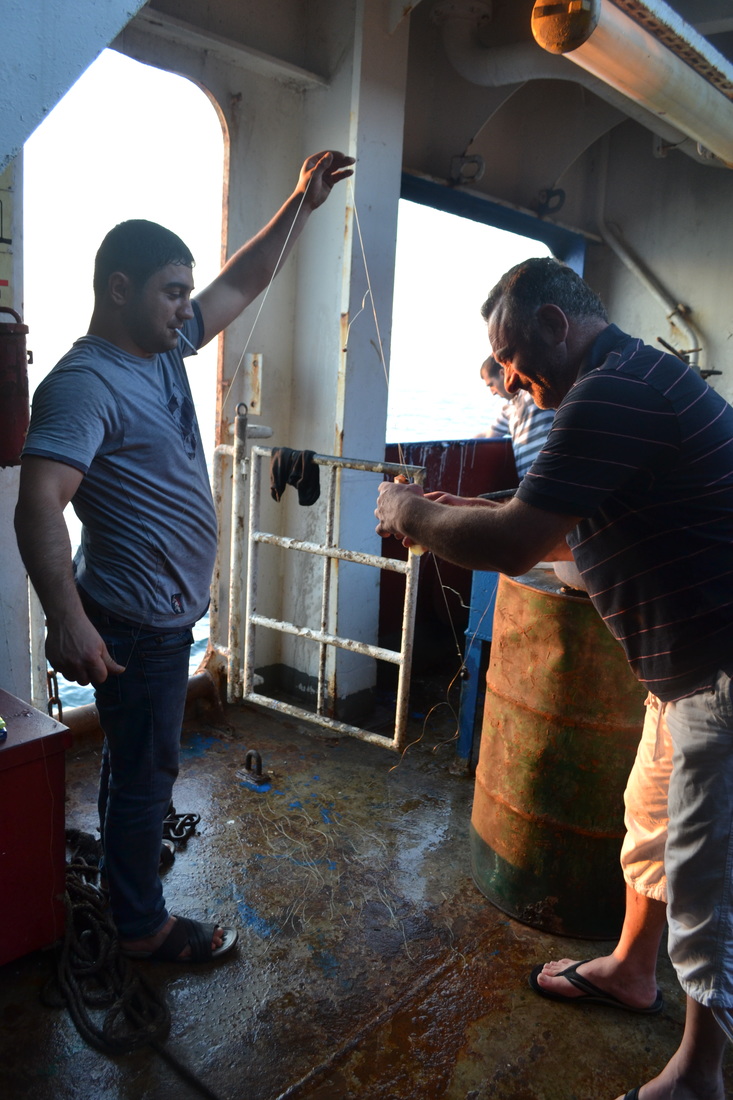 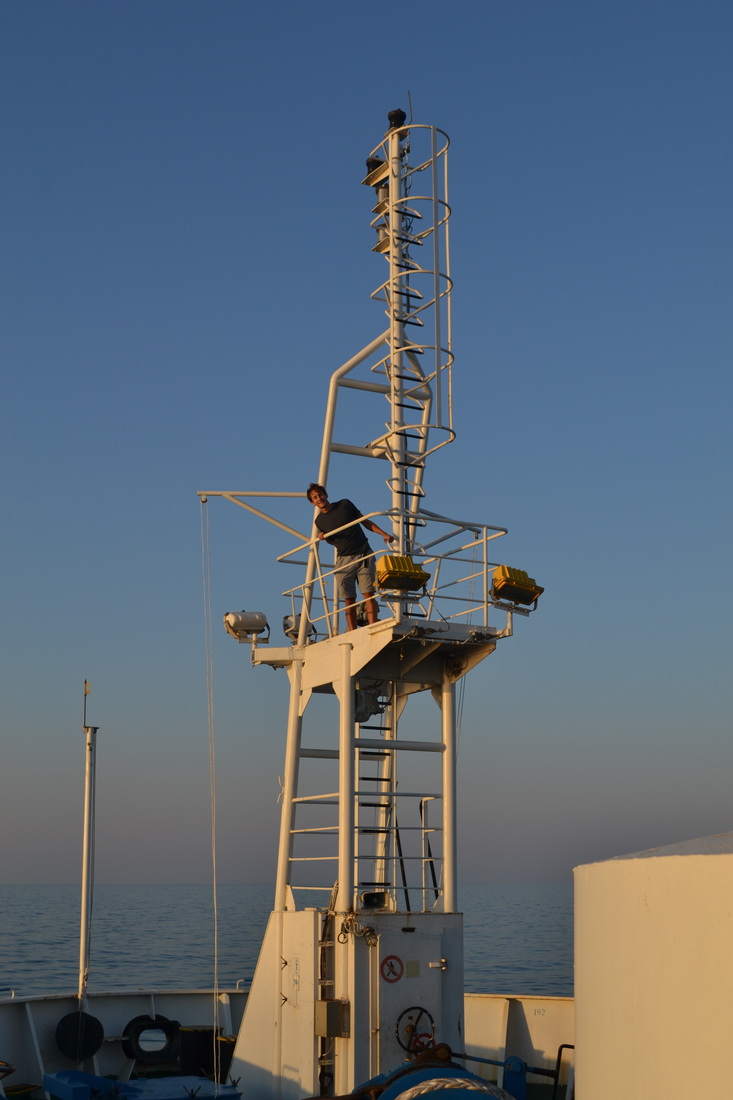