29th October - 15th November 2016
"It's because we're cycling... we wouldn't normally dress like this for a night out..." That's me, speaking to my South Korean friend in Seoul, trying to justify our ensembles. The next day, stepping out for some sight-seeing in the city. "Erm, maybe you could walk just a metre or two behind me' says Tim. I look down at my attire. My only 'civilian' outfit is in the wash. I'm wearing what I refer to as my 'travel trousers.' To the untrained eye, they might look like pajama bottoms and therefore an odd choice to pair with a pink puffer jacket. To each their own opinion. Fast forward 24 hours, I'm sat outside a bike shop whilst a very efficient man fixes our poor, battered bicycles. "What are you doing?" asks Tim, filming me. "Bugger off!" I'm sewing up a huge hole in my leggings, which I'm also wearing.

Hmm, I'm not really sure we were prepared for South Korea, we're proving very poor ambassadors for British style. Sometimes it feels like everyone in Seoul just stepped out of the pages of a fashion magazine - casting my eye down the row of chairs in an immaculate metro carriage I see a line-up of smart woolen coats, well-tailored trousers and shiny classic shoe choices. When we are cycling or hiking our eyes are drawn to the effortlessly chic attire of the people around us and even wandering through campsites feels like stepping into a camping showroom, the muted hues of the pristine tents seemingly selected specifically to complement the autumnal colours of their surroundings. Everyone got the memo to dress for the occasion here - apart from us.

It's not that we're surprised by how smart South Korea is, more impressed and a little bit in awe. To be honest, I came here with relatively few preconceptions and not entirely on purpose. Tim was very keen to cycle in Japan and in order to get there from China, South Korea was an obvious route. We had also heard about the bike paths that joined up the country. Within a few days, however, we had wised up and realised that this place was a destination in itself. The people we've met have been so welcoming and within hours of arriving, sat in a trendy arts cafe in Incheon and stuffing ourselves with pastries, a family sat across from us had showered us with sweets for our onward journey. That night, cycling toward Seoul, two young man approached us and gifted us a portable light bulb which has since revolutionised our camping (the tent feels like a living room! And is, incidentally, bigger than the one we had in London...) Cycling along the bike path was slow not only due to our lack of fitness post-China, but to the constant stops to chat with friendly fellow cyclists. The bike path itself is a-ma-zing. The 'four rivers' path joins Incheon, our port of arrival, to Busan, where we catch the ferry to Japan. The path mostly follows the river, is mostly flat (bar a few sudden ridiculously steep sections) and is dotted with cafes, rest-stops, facilities and the occasional speaker pumping out classic old-time tunes. It even has British-style phone booths along the way where you can stamp a route passport as you progress, earning a medal if you complete the whole course (we narrowly missed out on this accolade due to some confusion on our part regarding which stamps went where). Being in Korea in autumn was stunning and the trees were filled with contrasting leaves of shocking yellow, bloodshot crimson and vibrant forest greens.

The only real downside to Korea was the prices, which were slightly higher than we had been used to. Not that this stopped us from living it up in Seoul. My friend Sung-Ji, a local resident, showed us some very nice drinking holes, Michelin-starred restaurants and late night karaoke bar (Gangnam style, anyone?) Paying our way, however, became something of a losing battle. On one occasion, whilst trying to physically wrestle him for the bill, Sung-Ji had a sudden need to visit the toilet. Five minutes later, our suspicions were rising and Tim got up to check on him. A woman at the next table intervened: "your friend has gone to pay downstairs" she informed us, shrugging. "It's a Korean thing."
​ 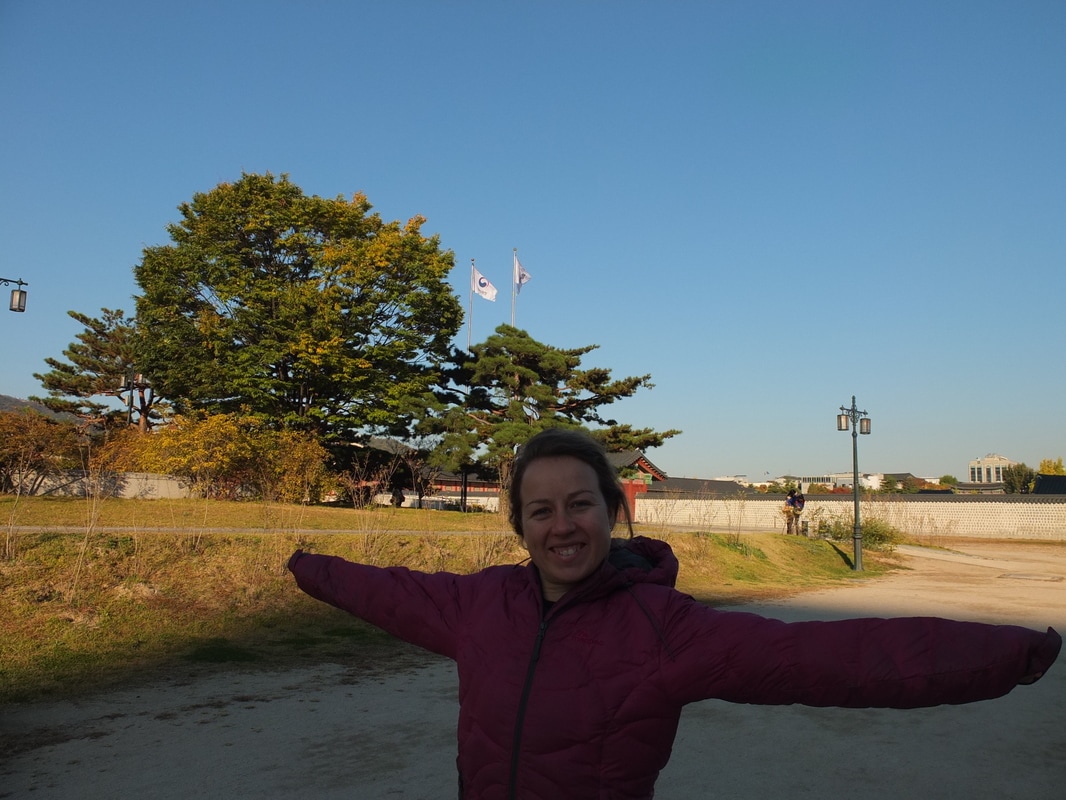 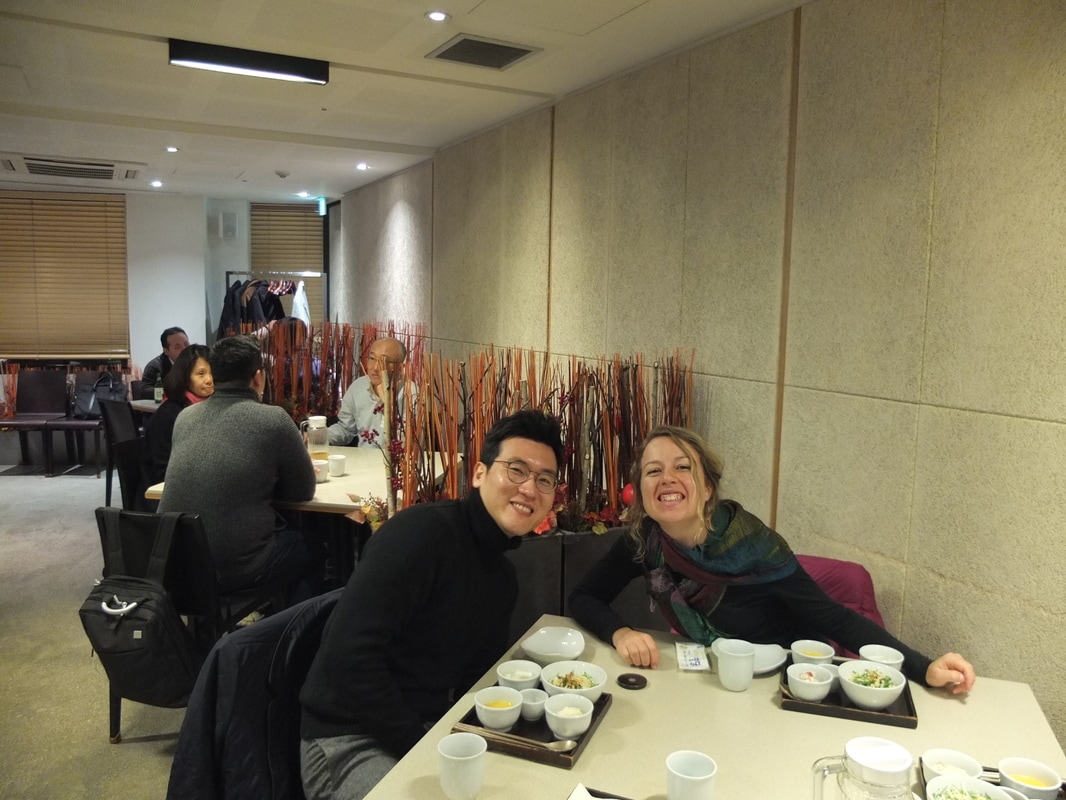 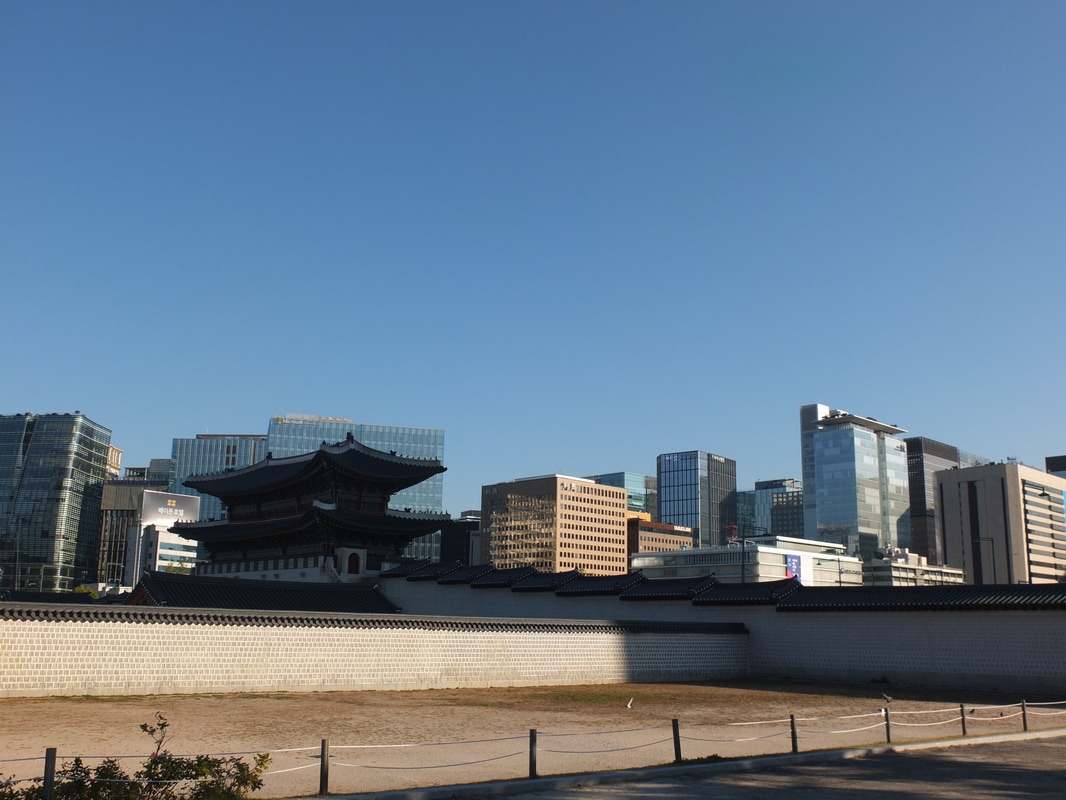 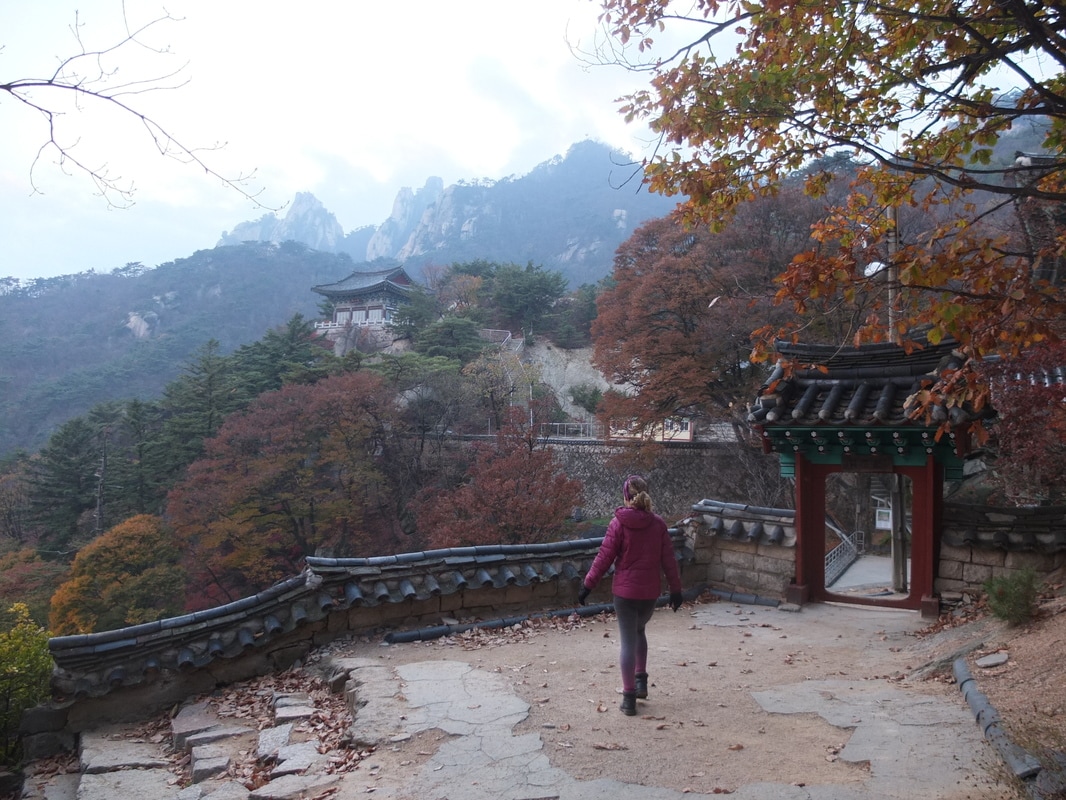 Day hike from Seoul to Mangwolsa temple
Wild camping along the route was always ridiculously easy. On one occasion we set up in an empty campsite and were approached by a man emerging from the building behind. He must be the owner, we thought, here to turf us off or charge us. He was in charge of the site, which catered to the nearby school, but rather than admonish us he was delighted to hear about our trip and invited us in for a coffee. His name, he told us, was Dragon Cloud, and he gave us route advice, biscuits and plasters. He then offered to spray us with air freshener which was concerning but understandable - we had been camping for days. We left with big smiles on our faces, oh thank you Mr Dragon Cloud! Half-way across the country, we met two French cycle tourers and spent a lovely though wet evening camping together under the shelter of wooden platforms along the path. The next night we parted ways as Tim and I wanted to stay in a hotel for a night to shower and dry out our things. We ended up finding a cheap 'love hotel' by the station in Jamcheon, equipped with blackout blinds, bedside lubricants and some rather shady television channels. Our time there couldn't have been less romantic as we had soon filled the bath with smelly cycling shorts and turned the water a dingy grey, covering every surface with drying clothes and passing out exhausted. Another evening we stayed with Warm Showers hosts Andrea and James who were off in Korea from the US teaching English. We passed a very enjoyable evening hearing about their experiences and just how hard the children work at school. Many attend extra classes late into the evening and sleep only a few hours per night.

We reached our final destination, the bustling port town of Busan, after three weeks in South Korea. We would recommend cycling this country to anyone, it has perhaps the best cycling infrastructure we have come across. We boarded our next overnight ferry onward to Japan. Luckily this time the sailing was smooth, we shared a room with a friendly young family and the boat even had a Japanese communal bath to soak in. This was a brilliant taster of what was to come. 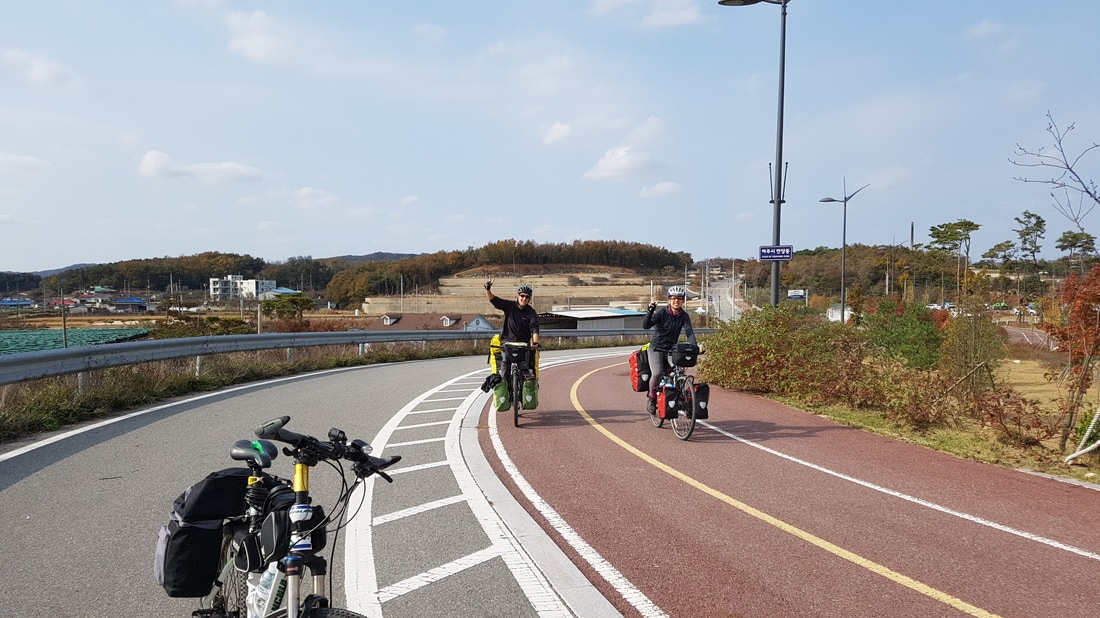 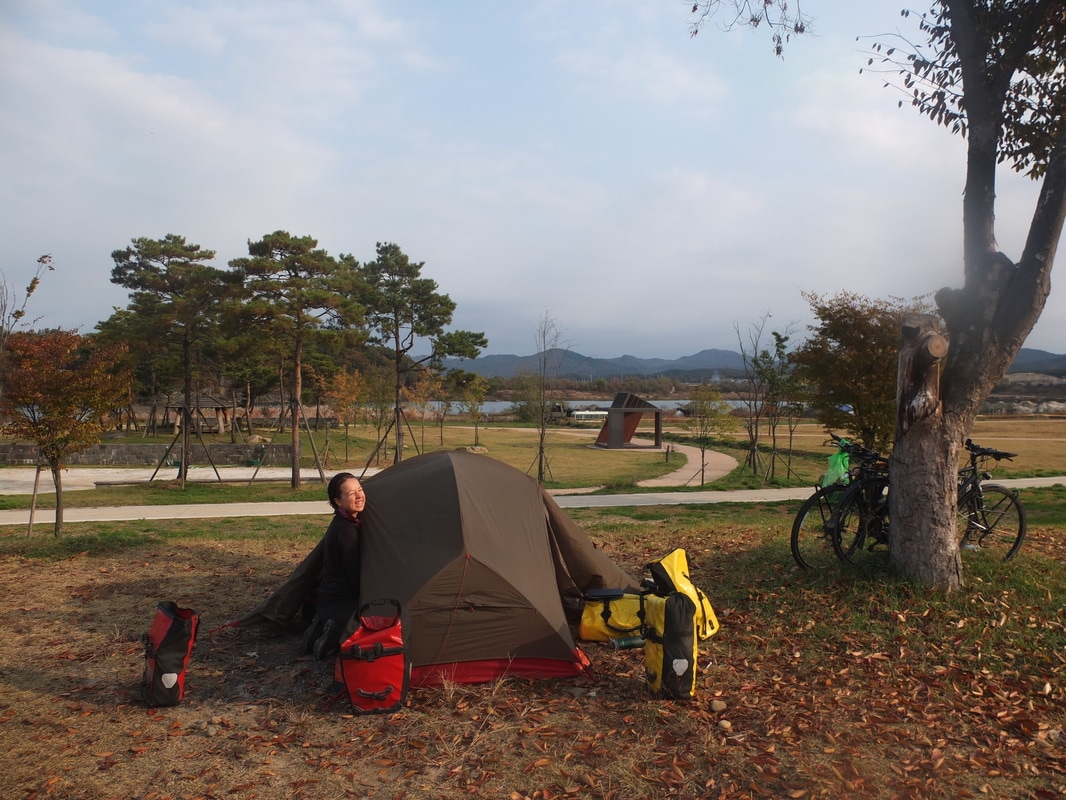 Wild camping in a park along the route 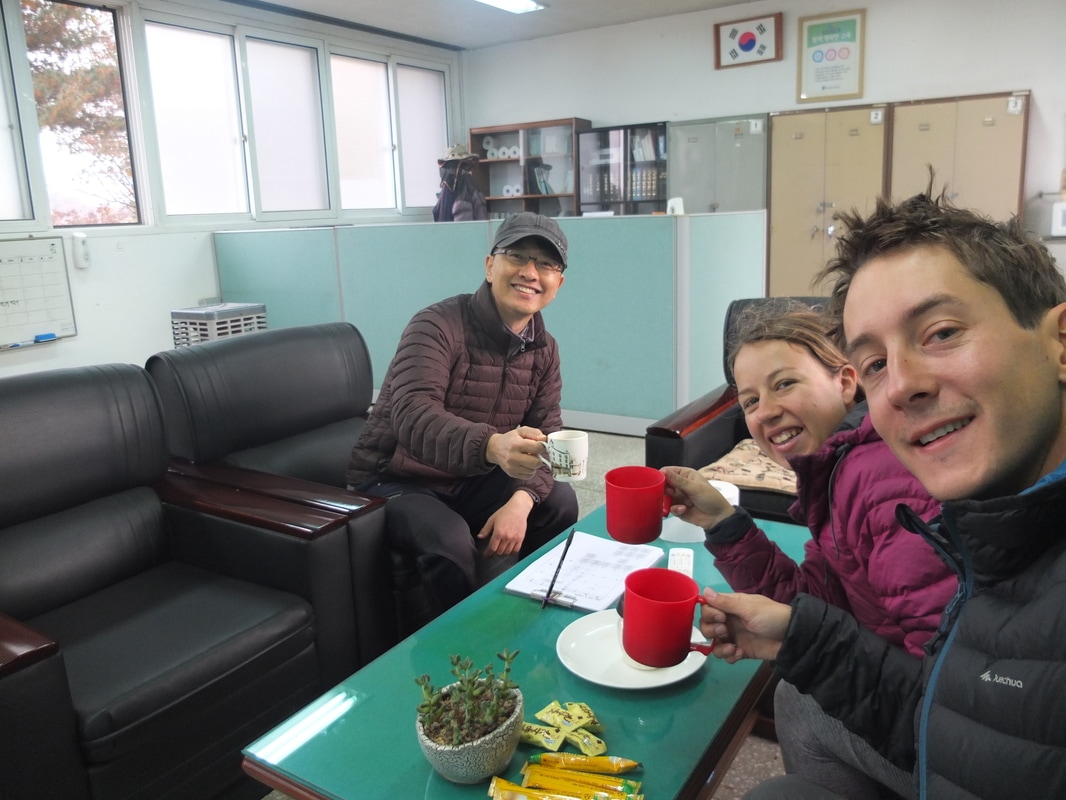 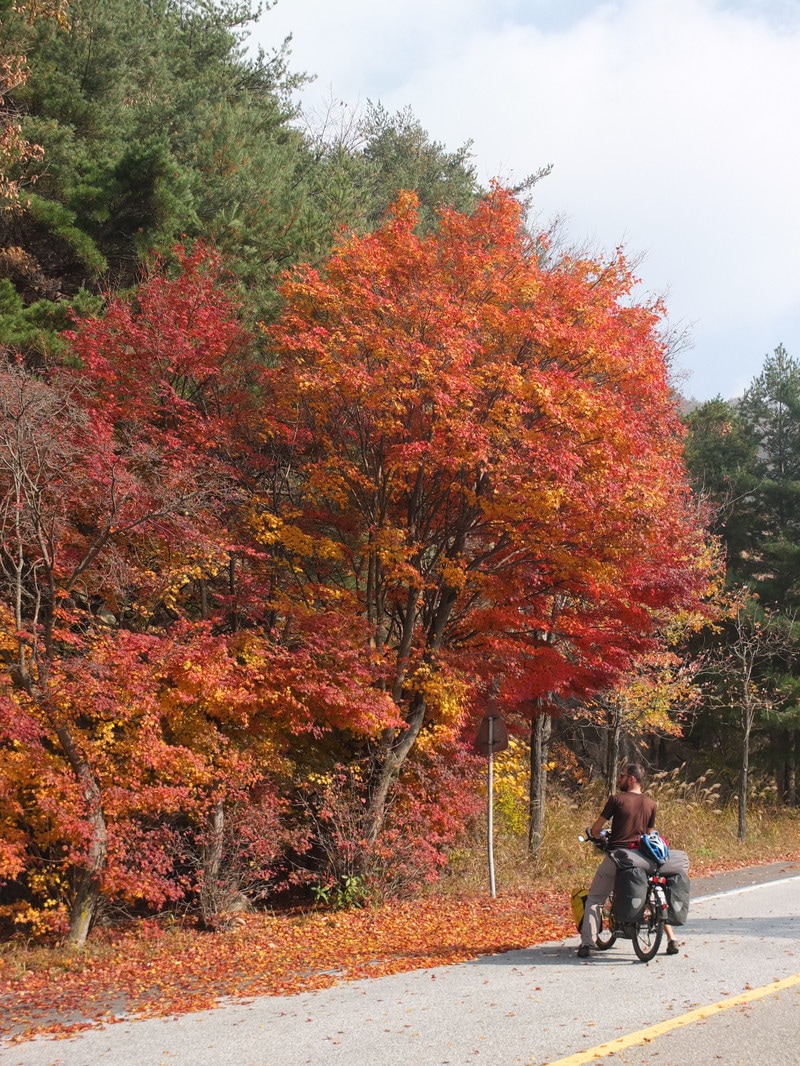 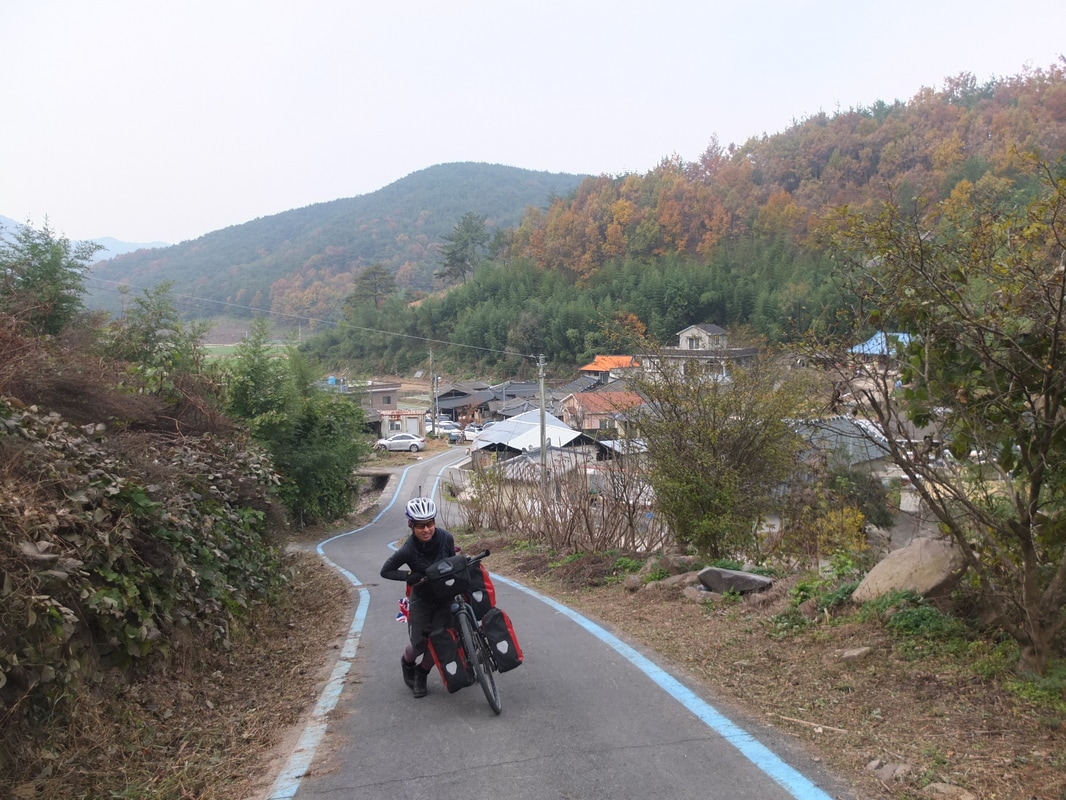 Who knew South Korea had hills?! 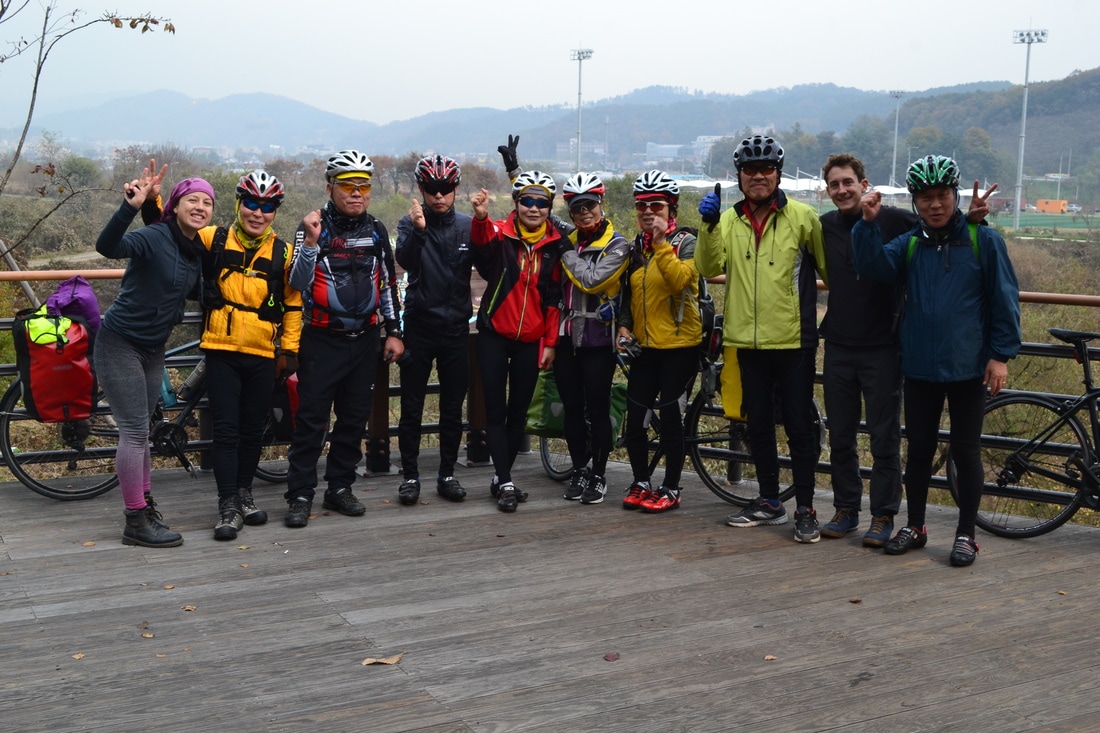 Making friends along the path 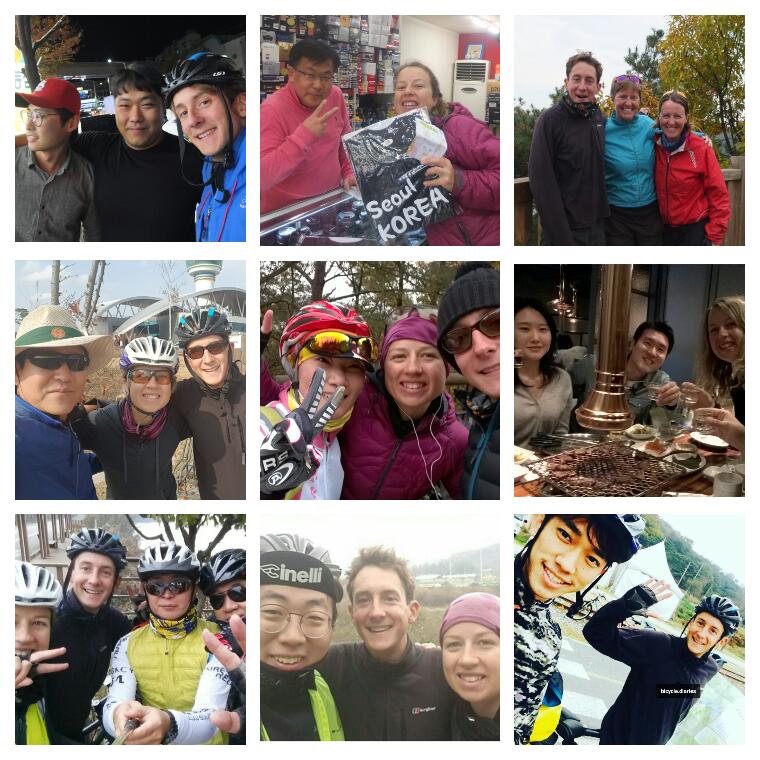 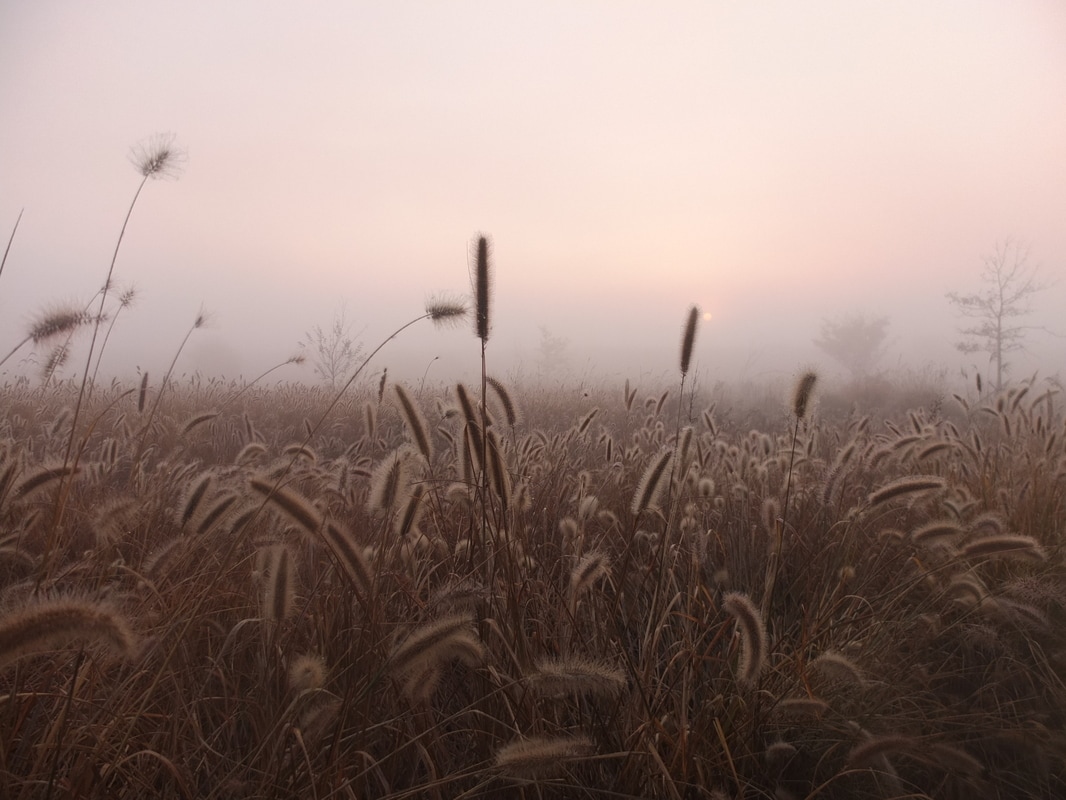 Morning view after camping by the river 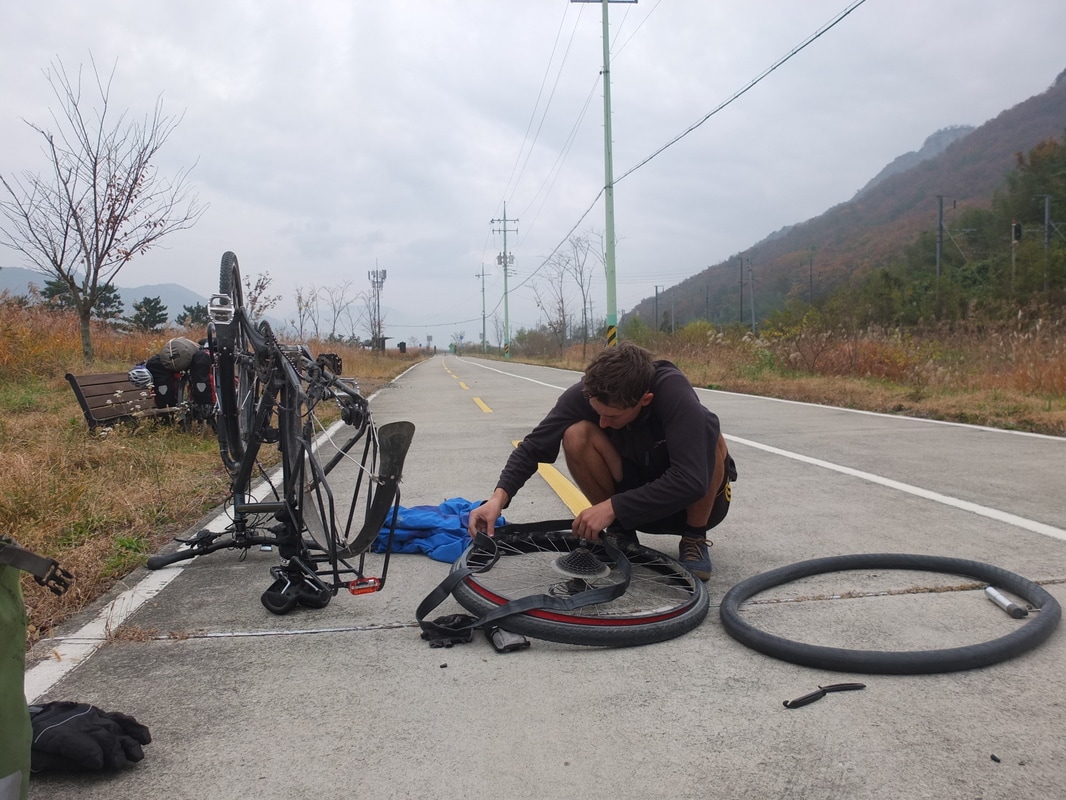 Flat tyre - luckily one of few on our trip 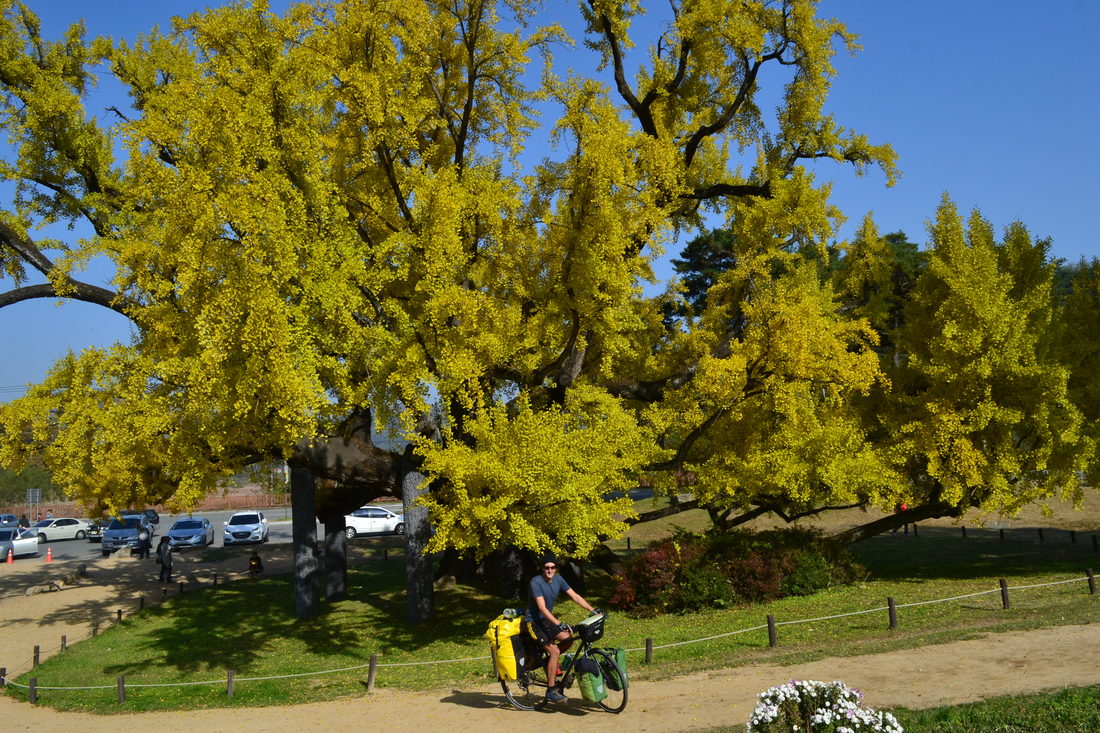