A hop skip and a train...
China

MSF Fundraising
​Upon arriving into China, some differences were immediately apparent: towns that had looked significant on the map in Tajikistan or Krgyzstan had sometimes constituted a handful of houses, whereas towns that looked like dots in China materialised into vast stretches of high buildings, apartment blocks and row after row of shops, banks and restaurants. Then there were the rows of tall trees lining the streets, dappling the sun onto the smoothly (oh wow were they smooth) paved highways below. However, the continuity with Central Asia was also obvious as we cycled onward to Kashgar through this Uighur region of China. The majority of the people we met were Uighur; they dressed Uighur, spoke Uighur, lived Uighur. They were within the drawn up Chinese borders, but their culture remained unique, Muslim and very much alive. We could still use the words we learnt in Central Asia, greeting people with 'assalamu alaikum’ and a hand clutched to the heart. The lively night market in Kashgar was stocked with tasty Uighur food and we happily stuffed our faces with plates of lagman noodles. The Chinese policy in this region has been to dilute the Muslim presence with an influx of ethnic Han Chinese and the tearing down of traditional Uighur neighbourhoods, something that was visually noticeable to us as we eyed the real estate projects springing up around Kashgar, transforming the city. Politically, this simmering suppression has led to murmurs of unrest and, on the rare occasion, acts of violence from Uighur separatists. Yet Kashgar retains its multi-cultural feel and on the surface, at least, feels like a calm and vibrant city that we were lucky to delve into. The noiseless electric scooters whizzing slowly through each narrow street, the colourful bazaar, the crowds streaming from the mosque, lively local music on the old teahouse balcony... Kashgar made for some truly enjoyable last days with our fellow cycle-tourers.
​ 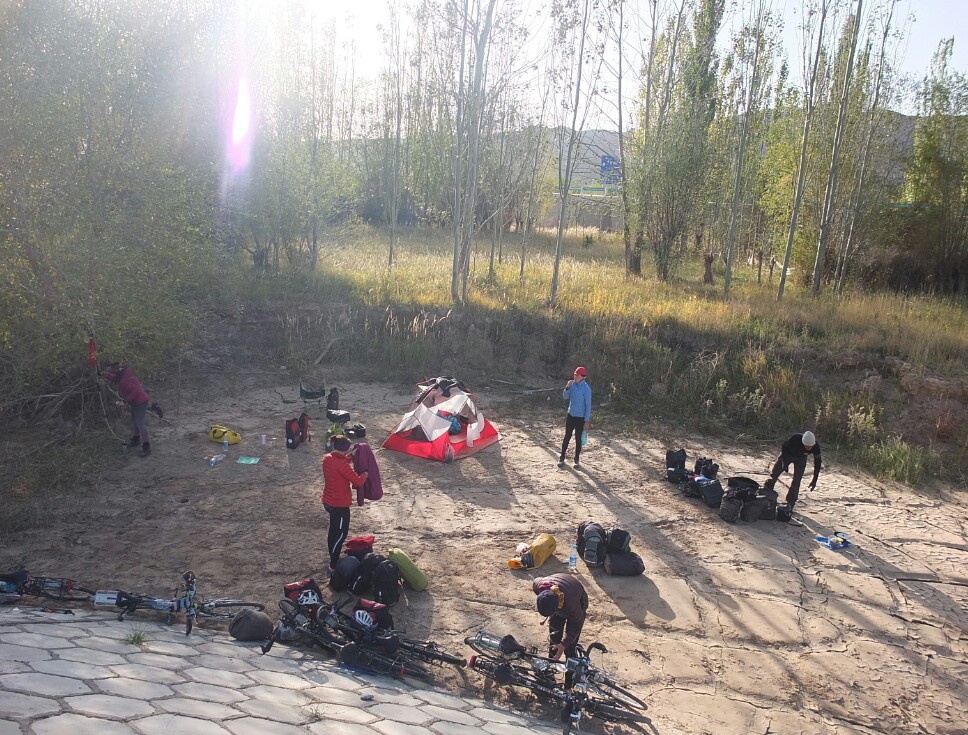 River bed camping on our first night in China 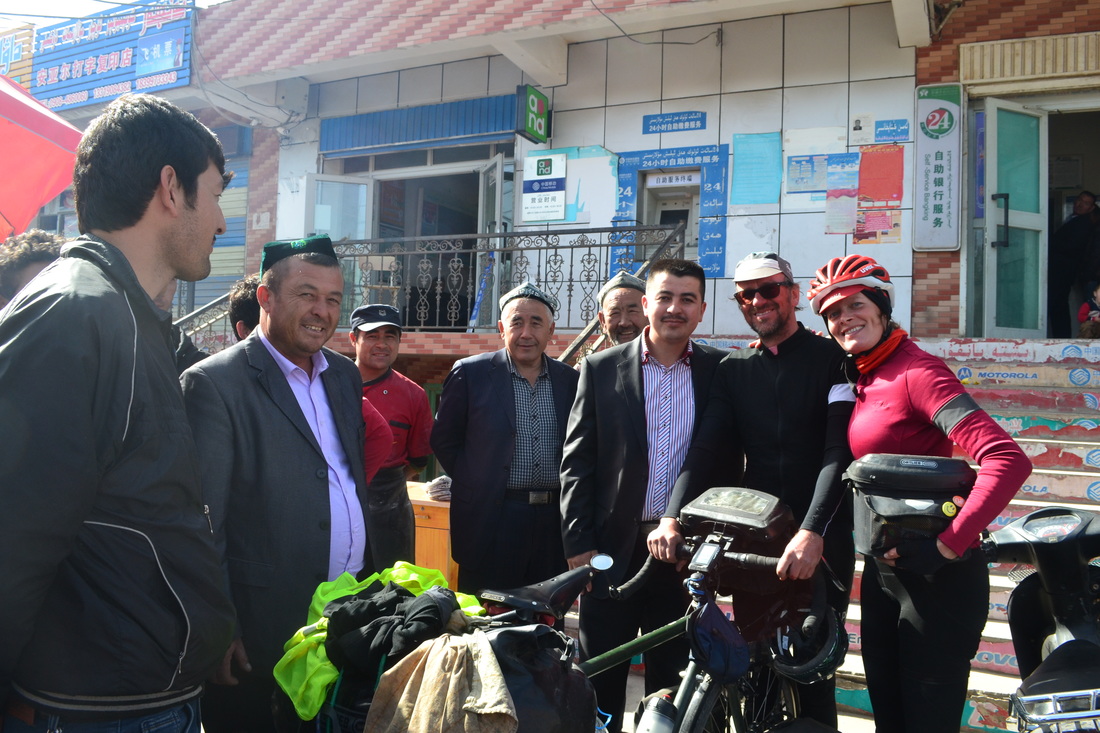 Chatting to friendly locals on our approach to Kashgar 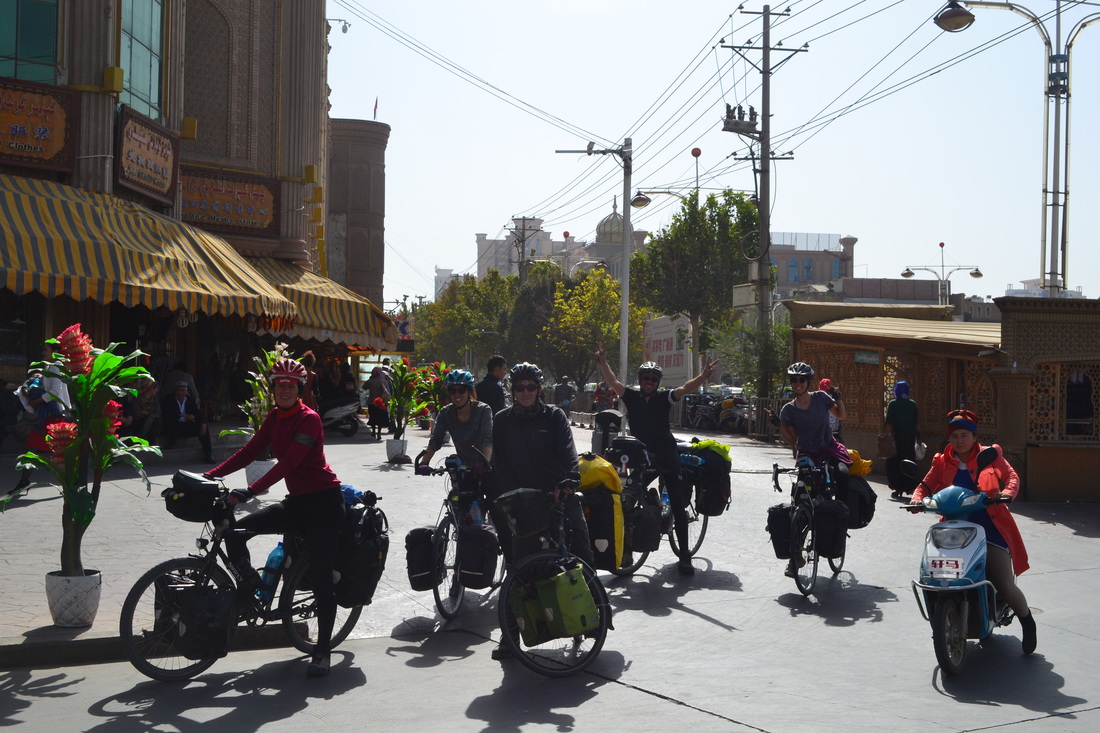 Negotiating the lively streets of Kashgar 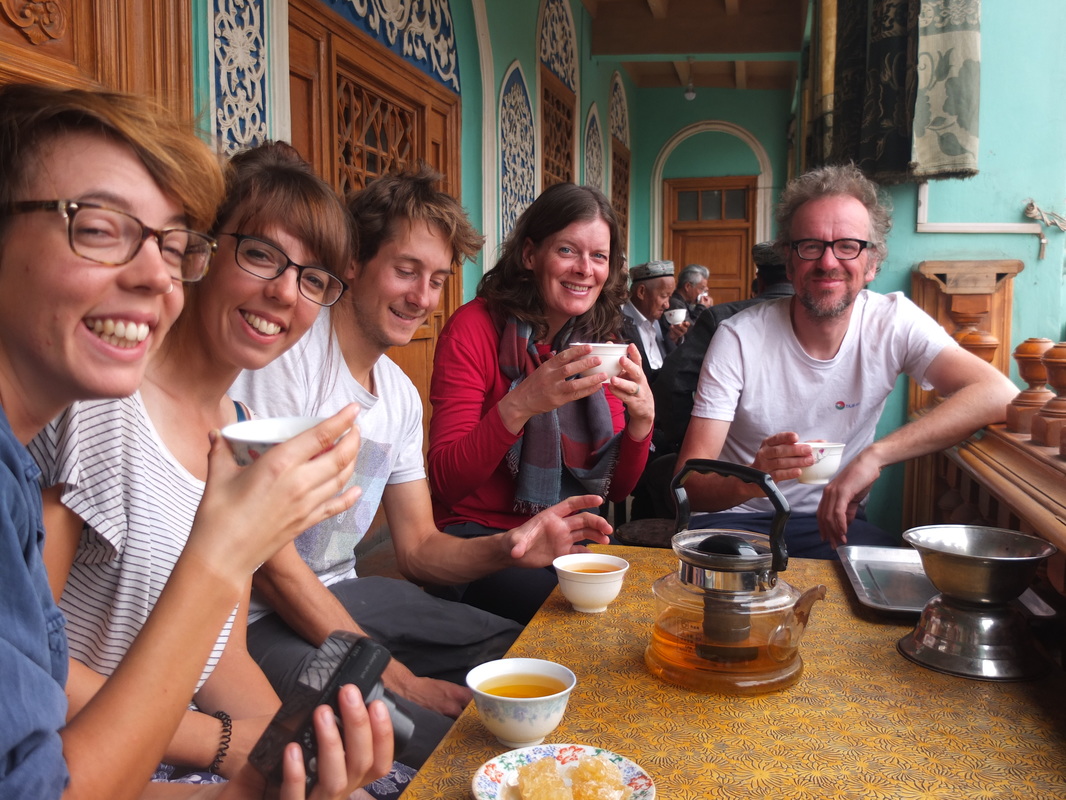 Enjoying a tea or three with friends at our favourite tea house
​From Kashgar we consigned our bikes to the post, not to be reunited until we caught trains across the whole length of the country - yes that's cheating, we know, but have you seen the size of this country?! Getting on board our first train to Turpan felt like a battle - lots of elbowing and herding. We found our cabin with a sweet older man and a noisy drunk younger guy. As it turned out, it was the former we were to be wary of, the silent, smiling assassin. As he tucked into his packed dinner he insisted several times that we take some of his bread. As I started to chew politely, I realised it was stuffed with some rather funky tasting meat and excused myself to go spit it out in the bin. Alas, it was too late. The assassin had struck! Eight hours later we both woke, writhing and moaning in our beds and soon I was becoming very familiar with the disgusting train drop toilet. On arrival in Turpan, we staggered as if drunk toward the taxi rank. I was feeling desperately faint, with a cold sweat creeping up my neck. The town centre was a 50km ride away and every speed bump elicited a collective moan from the backseat. For twenty agonising minutes we couldn't find the hotel we had booked. I was growing desperate, in every sense. Finally we located our lodgings and rushed to reception. Checking in was a hoot. Tim and I, clutching our heads and stomachs as though to prevent self implosion, shoved our booking receipt under the noses of the hotel desk staff. They didn't speak English and as we writhed around the lobby they conferred with one another in hushed and concerning tones before one woman took a piece of paper and wrote down the following dreaded three words...

I started to cry. Tim went back to waving our booking receipt around. 'We. Made. Booking.' He jabbed his finger at our confirmation desperately. 'BOOKING!' This went on for some time, round in circles, the whole thing surely looking fairly dramatic. At some point, perhaps following a realisation that we were clearly going nowhere fast, a key was produced. We descended upon it like fish to a maggot and trudged upstairs, hurled our things to the ground, took up our positions in the twin beds and proceeded to take turns on the toilet for the following 29 hours. A little later that day there was a knock at the door - the police were here! Tim spoke to them, explained how sick we were and that we were going nowhere. Although they spoke not a word of English, somehow, through his sheer diarrhea-induced determination, he saw them off. They came back with more police later, and then more still. On the third occasion they took our passport details and charged us a steep rate for the room, but finally conceded for good in the face of Tim's desperation (potentially aided by blurred images of me diving into the bathroom in the background). Then that was it, they had gone and we had won. We had staged a successful shit-in. Yet it was rather a hollow victory, as I sat on my bed and turned to Tim with sad teary eyes, uttering the three words that nobody ever wants to tell their boyfriend. 'I've pooed myself.'

The next afternoon we were just about well enough to take our next train to Xi'an - a 24 hour journey sandwiched in a three-tiered sleeper carriage. Our hostel in Xi'an was lovely and more importantly they delivered pizzas to our room. We did struggle out for some culture, as I explored the impressive tomb of the Emperor Jingdi and the two of us fought the selfie-stick wielding crowds to take in the incredible terracotta warriors. Our third train took us to Beijing, a wonderful city with historic hutongs (alleyways) to get lost in and the impressive Forbidden City which you could spend days exploring. We took an excursion to the Great Wall of China, with its tragic history but lingering beauty - its rises and curves seemed to follow the undulating hills in a beautiful symphony.

From Beijing we took our final train to the coastal city of Qingdao where we were reunited with our poor bikes (the journey had not been kind to them) and hopped on the boat to South Korea. Our first impressions of the ferry were good, the lounge and spiral staircase had the faintest whiff of the Titanic's grandeur (from my memories of the film, that is) and our room was more than comfortable. Once the ship got going, however, our delight gradually evaporated and was placed with something more akin to despair. Around 11 pm the sea became choppy and in the following hours huge waves formed and lashed higher and higher against the side of the ship. The motion felt a bit like being in a huge washing machine, churning round and round. Soon we were stumbling once again toward a toilet, this time to heave the contents of our stomachs up until we could retch no more. We woke the next morning to the boat gliding calmly through a serene sea that seemed to say 'what? not me.' We packed up and disembarked with the other smiling passengers feeling discombobulated and confused. It didn't take long, however, for the new country feeling to kick in - we were in Incheon, South Korea! 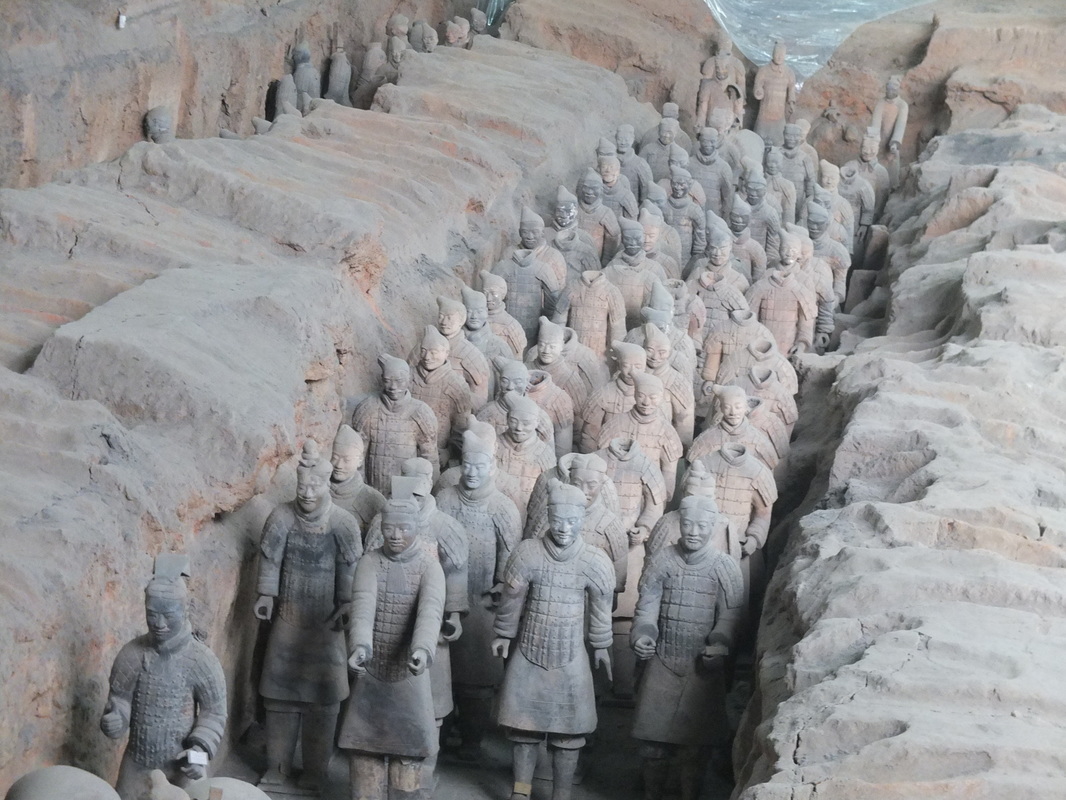 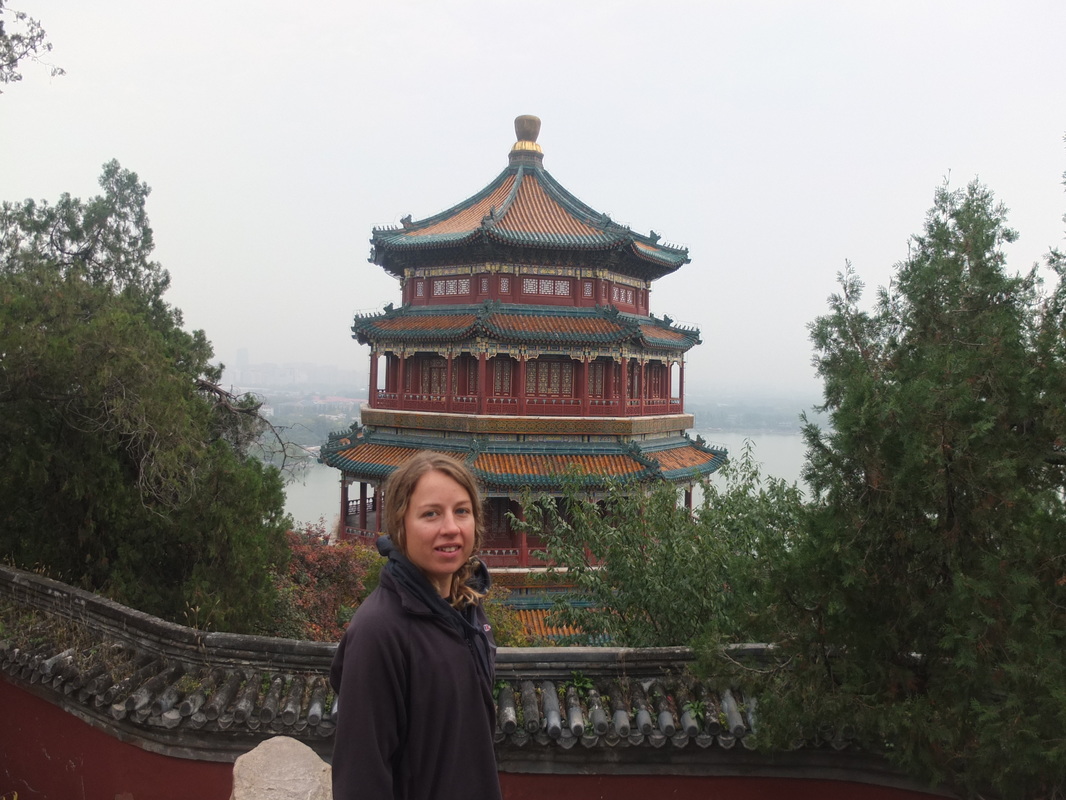 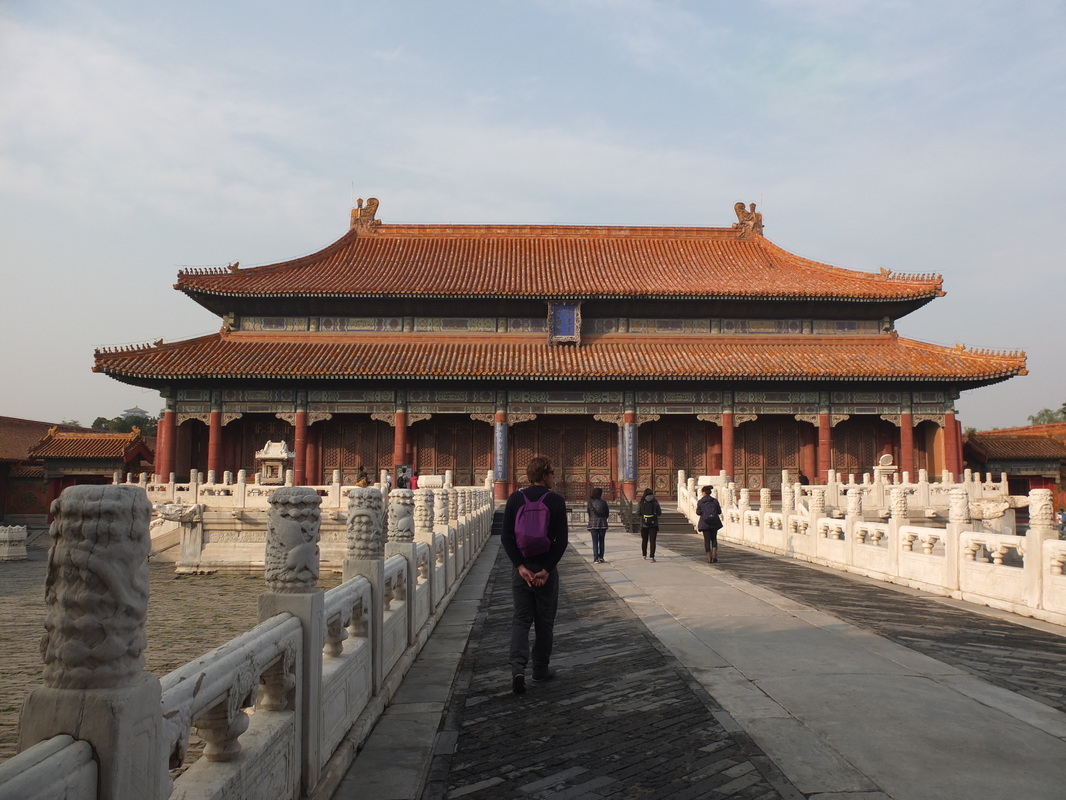 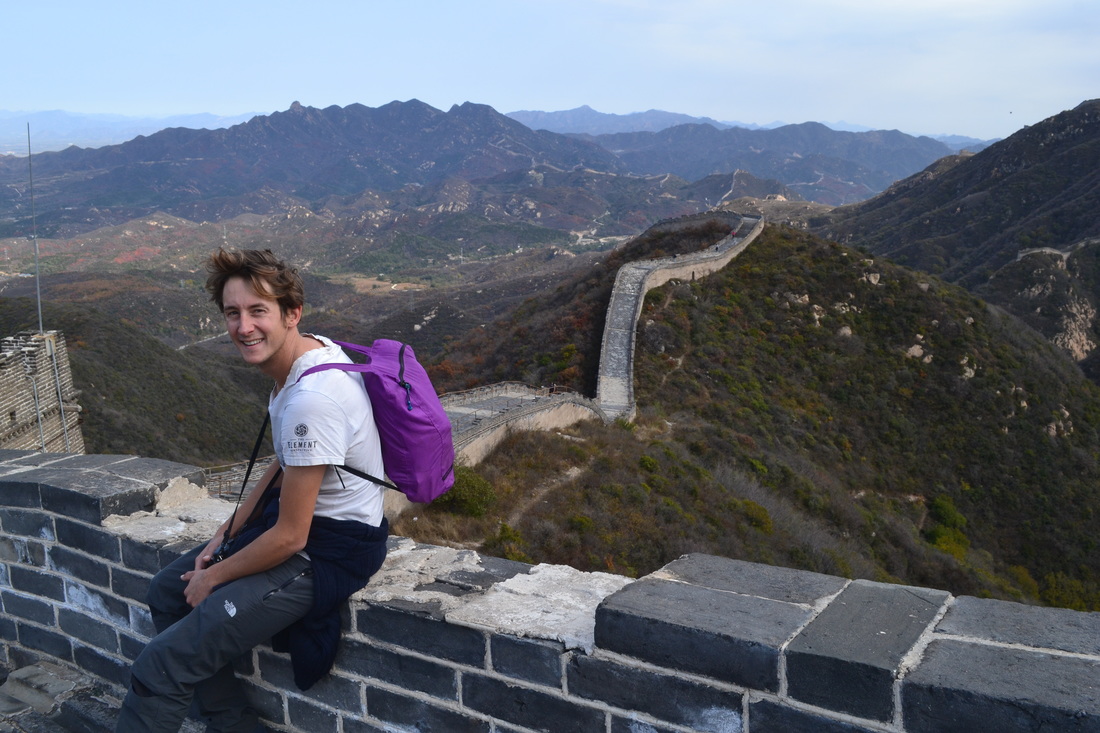